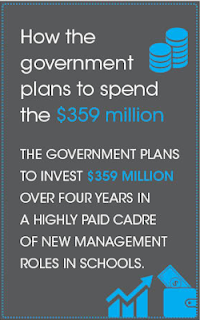 The Prime Minister announced on 23 January 2014 that the Government is investing an extra $359m in the education system to raise student achievement. A Working Group of education sector leaders has given advice on how to progress the Investing in Educational Success initiative. The IES Working Group is made up of sector leaders and has been supported by a Secretariat comprising staff from the New Zealand School Trustees Association (NZSTA), the Post Primary Teachers’ Association (PPTA), the New Zealand Educational Institute Te Riu Roa (NZEI Te Riu Roa), and the Ministry of Education (the Ministry).

Communities of Schools would form to encourage collaboration between school governance, leadership and teachers to improve their practice and deliver shared achievement objectives, which they would collectively set. Communities of Schools would self-identify and would largely be geographically defined, including a variety of school types (primary through to secondary). They would be expected, where possible, to reflect the student education journey through schooling. Participation in a Community of Schools is voluntary.

The Ministry would support schools to form Communities of Schools and help them in their operations. Communities of Schools would be expected to respond to the needs of all students, and especially Māori students, Pasifika students, students with special education needs and those from low socio-economic families in their communities. The Government has identified these groups as a priority as it believes they are over represented in New Zealand’s national achievement challenge.

Schools within the Community of Schools would have access to Inquiry Time (as described below) to enable teachers to engage in collaborative work to address their shared achievement objectives.

New roles
Four new teaching and leadership roles would be established to support collaboration and effective practice within Communities of Schools and to provide clearer career pathways for teachers and principals.

Boards of trustees remain the employer in all cases and boards would need support to fulfil their role in IES. Selection to the roles would be subject to meeting agreed professional standards or criteria, which are to be developed by an expert writing group. Application and appointment to these roles and assessment against these professional standards/criteria would include external independent experts.

Release time would be provided to schools for across-community roles to fulfil their functions, and release time for the Community of Schools (within school) Teacher role remains under discussion. All roles would be appraised by their employer. Those with an involvement across the Community of Schools would have input from other schools into their appraisal reflecting this role. These roles are fixed-term positions and if candidates are re-selected to these roles, they would require reassessment as continuing to meet the relevant professional standards.

The within-school role is an ongoing position, subject to regular review against the relevant professional standards.

On Tuesday 10 June NZEI and NZPF held a joint Hui at Te Papa in Wellington to discuss the detail contained within the various IES Reports, which were finally published on 3 June.

The day was independently facilitated by Vivian Maidaborn, and was structured under four key “themes”. These were used to focus the discussion and to direct people to read the detail. Groups were asked to classify their findings into those aspects which can be supported, those which can’t be supported, and those areas where more clarity is needed. That exercise took most of the morning. The day concluded with a request from the floor for a straw poll to be taken, and apart from two votes in support of the policy and two abstentions, the policy was universally rejected.

Here are some of the concerns that informed that decision:

Flexibility
• Inequity for those who don’t opt in
• Rejection of a policy that is one size fits all
• We need to be able to access the money to best support the cluster, and that may not require an executive principal
• Funding one person to get others to collaborate?
• Impact on children when lead and expert teachers are in and out of class
• Impact on a school when principals are away for average of two days a week

What was telling was the lack of support for the bulk of the money to be directed to salaries. People felt that if collaborative practice is to be enhanced, the process is the critical bit, and targeting the bulk of the money to these roles will not encourage good process. There were also concerns about the dovetailing of the roles into existing career paths and senior roles, with the potential for undermining.

The policy development process was also criticised. The secrecy surrounding the process has engendered further mistrust, and now that the policy has landed it is critical that it is debated and understood. There was also a strong voice concerned about other priorities. Is this the best use of $360m for Education at present? Despite the risk of this money passing the primary sector by, people were more focused on getting priorities correct.

This is potentially a watershed moment for NZ Education, and we must act wisely and be as well informed as possible.
Posted by timl27 at 12:35 PM No comments: